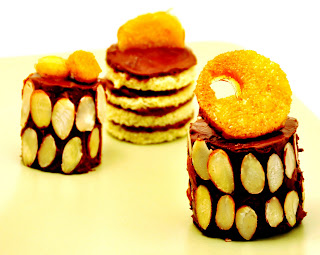 The August 2009 Daring Bakers' challenge was hosted by Angela of A Spoonfulof Sugar and Lorraine of Not Quite Nigella. They chose the spectacular DobosTorte based on a recipe from Rick Rodgers' cookbook Kaffeehaus: ExquisiteDesserts from the Classic Caffés of Vienna, Budapest, and Prague.

Since I'd already made this in cake class just a few months back I was going to sit this challenge out, it wasnt my favourite cake. But I suddenly felt inspired, I had some extra chocolate buttercream in the fridge, and it seemed like a good opportunity to play with my food and give it a try.
Dobos torte is a multi layered cake, composed of a sponge, chocolate buttercream, and a top sponge layer which is covered in caramel. I enjoyed the caramel part, but I find the sponge chewy and not so appetizing. I prefer buttery and crumbly, or oozy and gooey.

It quickly became apparent that making little cakes is harder than it looks! The sponge was easy enough, I halved the recipe, then spread onto a parchment on a baking sheet. It was very quick to stamp out circles with a cookie cutter. It was harder to cleanly spread buttercream onto the little discs, and I didnt have the patience to cleanly smooth it to make for a perfect presentation, so I placed almond slices on the sides of the cake. I then saved some circles, pouring caramel over them and placing them on top of my little cakes.

Please head on over to the daring kitchen for the recipe, or to join in the challenges, and to see how the other daring bakers got on.

Northern California and a new hobby! 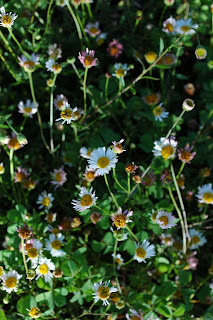 I inherited a camera when my lovely husband decided to upgrade, so I had lots of fun snapping away in wine country over the weekend! 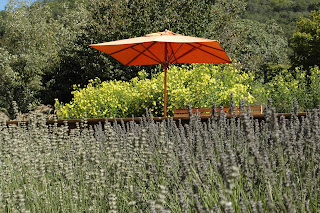 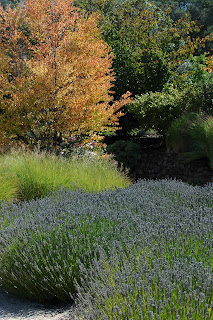 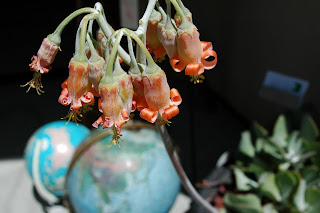 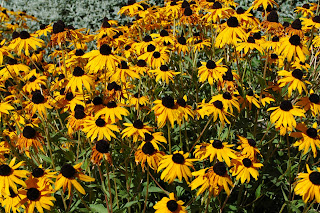 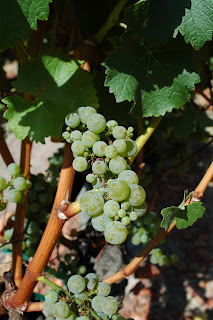 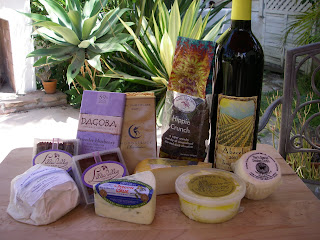 I was contacted by some lovely folks in oregon to ask if I'd like to help to judge their competition. How cool is that?! I love oregon, and I love cheese and chocolate, so it was a winning combination.

Oregon Bounty Cuisinternship Contest started today, a great all espenses paid trip to follow an expert for a week. So if anyone is interested in entering, check the website, and get writing! Even if you dont win the competition, the website has lots of tools to plan a trip.

We had an absolutely lovely wedding anniversary in Portland in 2007 and keep trying to think of excuses to go back, so this was a lovely reminder that its been too long!!

The cheeses included some rogue blue cheese, a delicious goat cheese tapenade, a firm white cheese, and a very oozy brie type of cheese. Our favourite was definitely the Rivers Edge Chevre Tapenade from three ring farm, it was remeniscent of boursin with the garlic, but so much better!!

There was a very quaffable fruity tempranillo wine, which we slightly chilled since it was a warm day.

The chocolates were an interesting mixture, there was a 'hippy crunch' mix of chocolate and rice, which was a good snack. There were a couple of lavendar chocolates, a dagoba lavender dark chocolate, and some fleur de sel caramels which were topped with lavender. I really want to love lavender in desserts, but it just tastes nasty to me, so I'm sure I would have loved them without the lavender! I think my favourite were the berry chocolates which had a lovely berry mixture in them and some nice crunchy seeds.
Posted by Jennywenny at 4:10 PM 1 comment: 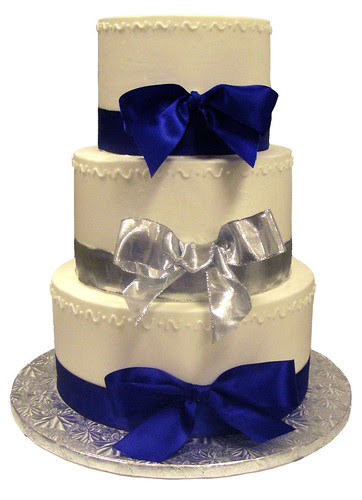 Welcome to the real world, Jennywenny!

I had the opportunity to work at a local bakery as part of the Culinary Program at Grossmont College. It was a fantastic experience. I learned about a million dollars worth of stuff, and although I worked for free, it was well worth it for all the stuff I learned.

The bakery has a few different cake flavors and designs that they generally make, mostly presented with buttercream frosting and simple piping. They have an incredibly sturdy system for making sure that the cake stands up to all manner of abuse and wobbling before the happy couple take their chunk of cake.


It was a little disappointing to find that the buttercream used was a standard 'American Buttercream' made with shortening and sugar and a little butter flavor and vanilla to make it palatable. I generally use swiss meringue buttercream for my cakes and it seems to be really easy to work with, this stuff took a bit of getting used to, and doesnt taste the best. I understand that most bakeries use this, so it wasnt an enormous shock for me.


In my 120 hours of experience, I learned how to torte and cut the cakes to size, then fill a 'dam' of buttercream with a tasty filling, making sure to use lots of flavored syrup to moisten the cake. A 'crumb coat' of buttercream was added, followed by at least two layers of buttercream, then lots of smoothing to get the perfect finish.


I never did get the perfect finish, but I got close! I'm told the secret is dipping the scraper into really hot water and having the cake very well chilled.


I also learned about putting ribbons on cakes, which I've not tried, and about piping, which I got used to.


This is a finished cake that I did, I was very happy with how it turned out, I did get some help with smoothing the buttercream, but I built the cake and did the ribbon and the piping.

It was an invaluable experience, I've read lots about what its like working in the food industry and it was great having this experience. I'm eternally grateful to grossmont college, since I'd worked in their kitchen I had a feeling for how things work in an industrial kitchen so it didnt feel too wierd.

Something I was reminded of was that it will become repetitive pretty quickly. Making cakes for friends is one thing, the cakes are different every time, and its fun, but as a profession, you have to pare things down a little and things get repetitive pretty quickly. Most bakeries have a choice of somewhere around 10 different flavors of cake/filling, and a similar number of designs. It wasnt a long enough period of time to know whether I would be bored out of my mind in a few months.
Posted by Jennywenny at 4:45 PM 6 comments: 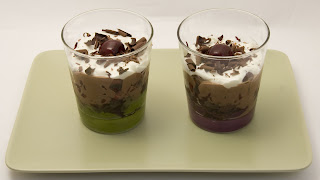 Cherrapino got me all excited about making a black forest trifle. I picked up some beautiful cherries from smit orchards at the farmers market. With all the cakes I've been making, I've always got plenty of cake scraps, so I layered some chocolate fudge cake, drizzled with kirsch, added a layer of chocolate custard, cherry and whipped cream with a little shaved chocolate. Yum!!

Whisk together milk, vanilla and eggs. Warm on a low heat until the custard coats the back of a spoon. Add melted chocolate and stir together. Cool before adding to the trifle. 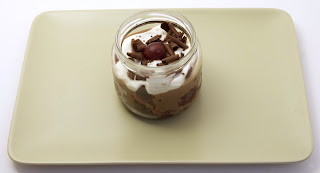 I also made a trifle in a jar for my friend as a surprise!
Posted by Jennywenny at 10:38 PM 6 comments: