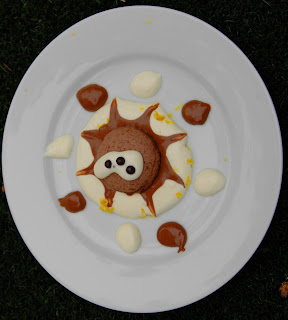 Wow, I guess my dessert makes a statement. By way of explanation, I plated this super early in the morning, maybe my brain wasnt totally into the game yet!
The June 2010 Daring Bakers’ challenge was hosted by Dawn of Doable and Delicious. Dawn challenged the Daring Bakers’ to make Chocolate Pavlovas and Chocolate Mascarpone Mousse. The challenge recipe is based on a recipe from the book Chocolate Epiphany by Francois Payard
The pavlova consisted of a chocolate meringue, a marscapone pastry cream, and a marscapone ganache.
I absolutely adore pavlova so I was super excited. My first thought when I saw some pictures was that it looked like dog poo, I was a little un-nerved but I thought 'I can do this'! I think if I had added some seasonal fruit, it would have really improved this dish, I ate the leftovers with figs, and it was wonderful!
Time got the better of me, what with all the stuff going on in my life, so I decided that I would make the components, but it was very last minute.
I was pretty disappointed with this dessert. I was disappointed in the recipe, for instance the pastry cream, which was really supposed to be a drizzle, was supposed to be made with 6 egg yolks, which was just ridiculous, and the whole recipe seemed to be about 3 cups of marscapone, which is pretty out there. I reduced the pavlova recipe by 2/3, the pastry cream to 1/3 and the marscapone ganache to 1/2.
The flavor was also a little disappointing. I overcooked the pavlovas, since I made them as tiny little mini meringues, and the marscapone cream was pretty underwhelming.
After this review, I'm not sure that you would want to give it a try, but do go and check out all the other inventive ways this dish was created on www.thedaringkitchen.com
I really appreciate the opportunity to grow and learn with the daring bakers, this was just one challenge that was underwhelming. I look forward to a new challenge next month!!
Posted by Jennywenny at 8:28 PM 5 comments: 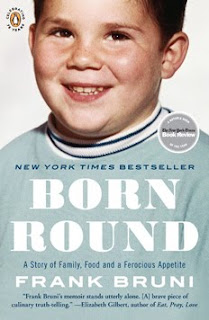 I recently read the memoir of Frank Bruni, reviewer for the New York Times (amongst other things!). I found it a really interesting read, learning about his wonderful family and dear mother.

Over the entire book his weight fluctuates wildly as he desperately attempts to control his urges around food.
The most poignant episodes to me were times when he ended up baling on dates because he was so disgusted with himself and his weight, it seemed so sad that he gave up on companionship and love because he hated himself and his weight so much.
There were tales of bulimia and all kinds of strategies to keep himself trim and scary binges of pizza, cheesesteaks and ice cream.
It was sad to read about his mothers struggle with her weight, and maybe how she taught him to be wary of food as he grew up. 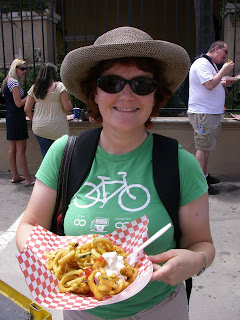 Learning more about the work of restaurant reviewers is a nice reminder that it really isnt that fun a job, eating out at least 7 nights a week, trying to grab enough willing diners who dont mind sharing their meals with you, and dealing with over-anxious restauranteurs who are desperate for a good review.
The main revelation from the book for me came when he lived in Italy, and he realised that the reason these people were a normal size was because of their portion control. They ate small portions of real food. Just like Marian Nestle and Michael Pollan have been trying to tell us!

It really struck a chord with me since I've always had trouble around food, knowing where to stop. I'm lucky, I'm not horribly obese, but I'm always on the chubby side of normal. I think the problems started as a small child, I was a little overweight and I was encouraged to cut back a little. I've never experienced that intense pleasure that Frank Bruni describes when he binges, and for that I'm very grateful.
Maybe I'm lucky, I generally just have a little more to eat than I need, I exercise as much as possible, and I eat lots of fruit and veg, and wholegrains to keep myself full, so I may even be healthier than some of my skinnier counterparts. I have to be relatively strict, I only eat out once or twice a week, I never go to fast food restaurants, and I avoid most processed food.
It also got me wondering, am I more normal than I thought? I always thought I was a bit strange with my continued thinking of what I'll be eating next, maybe looking forward to something for a whole week. Maybe most people think like that, and constantly have to keep check of their eating to keep themselves at a healthy size?
Its just so sad to me that so many people suffer so much with something that is supposed to be one of lifes greatest pleasures. At no time in history more than now have people been so large, we've somehow lost all proportion of how much, and what we are supposed to eat. Are we beyond saving?
I'd love to hear any/all opinions in the comments section!
Posted by Jennywenny at 5:02 AM 4 comments:

Email ThisBlogThis!Share to TwitterShare to FacebookShare to Pinterest
Labels: Books 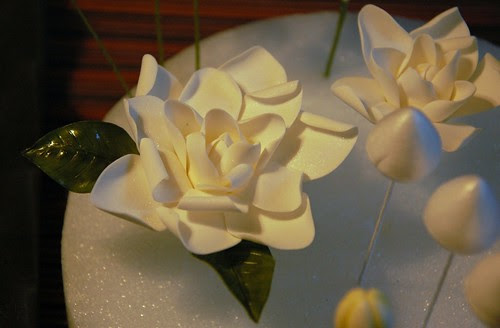 I recently had the enormous pleasure of taking a one-on-one class with the immensely talented Jaqueline Butler of Petalsweet Cakes.

Of course I had a giant list of things to learn, but she knew what we could fit in and even that was very ambitious. We settled on some sugar gardenias. I love these flowers, so I couldnt wait to recreate them in sugar. I also 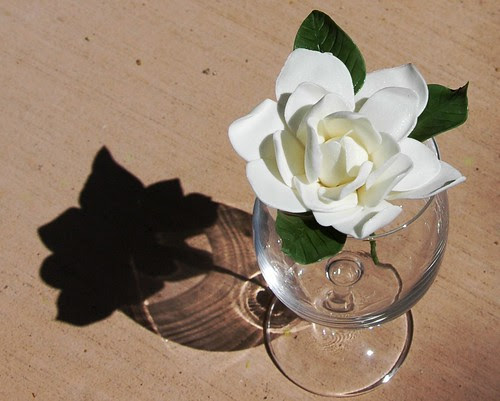 wanted to make sure that it was a fairly quick flower that I had a chance of being able to replicate in a short enough time to be worth my while, and to be something that isnt easy to get fresh.
Jackie is extremely thorough, patient and well organised. She sets everything out carefully before starting and it was a good lesson to me to make sure I have plenty of room and try to work cleanly and neatly.
Of course they were a lot trickier than they look, but we slowly worked and I finished the class with a full flower, two smaller flowers, 3 lovely glossy leaves, and some buds. I also had a huge shopping list of things to buy!

I learned some very important techniques that I can apply to lots of other stuff, using the colors and lustre dusts, the laquer to get glossy leaves, and making and rolling out gumpaste and shaping petals for a realistic flower.

I'm sure Jackie would be more than happy to hear from anyone who would like to take her lessons, she's based in San Diego, so give her a shout if you'd like to learn from her! She also has a facebook page, its always lovely to see her creations. 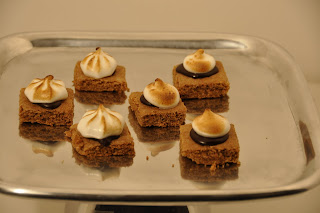 I found these little treats so delicious I just had to share! It really is worth making the effort to make your own graham crackers, they are totally addictive!

I took a graham cracker recipe from culinary in the desert, next time I'll probably roll them out a little thinner. It really helped to use a pizza cutter and cut them before they went in the oven, and then again before they cooled to make it easy to separate them.

I then topped with a little chocolate ganache, which is just 1 part boiling cream to 1 part good chocolate, combine then stir occasionally until the chocolate is melted and chill a little until the consistency is thick enough to stay on the crackers. 100g of each should be plenty.

I then topped with home made marshmallow from this recipe on the food network and got my torch out to brown the tops, my favourite thing to do in the kitchen!

These treats are going to round out a dessert platter for a wedding I'm involved with at the beginning of next month. There will be a plate for each table containing lemon tarts, choc chip cookies, peanut butter cookies, these and some mini cupcakes! 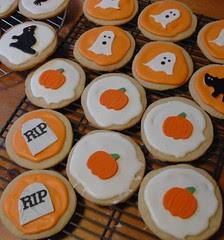 The next thing I'd like to try with this recipe is making larger cookies, covering with ganache and decorating with fondant, I think that would be a super delicious and cute party favor! Here are some similar sugar cookies I did, I think graham crackers would be delicious!