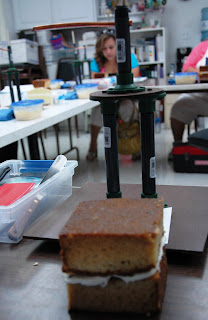 Today was one of the most fun days I've had in a while. I managed to get a day off work and sneak out to take Lauren Kitchens' class on making a 3D muppet. The class was held at 'Do it with Icing' in Clairemont, San Diego.

Lauren and Ashley were just the most lovely people, and I'm starting to think that the more people I meet who do great cakes, the more I love the cake community.

She gave us all the basic setup, the supports which would be holding up our cakes, which consisted of a masonite board with some sprinkler parts screwed into it, copper piping and a dowel to hold up the head.

We then set apart carving the little body, which turned out to be the only cake. This was covered in white chocolate to make it smooth.

A head was fashioned out of rice krispy treats, which was covered 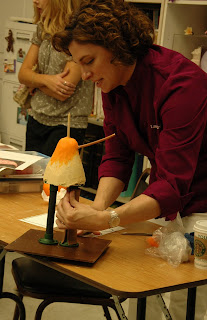 in modelling chocolate (a mixture of seized chocolate and corn syrup). This is great to work with as you can just keep smoothing it. It is a little difficult to work with when warm.

We carved a mouth out of the head, then put it in the fridge as we finished our bodies and arms, and covered the legs with modelling chocolate. 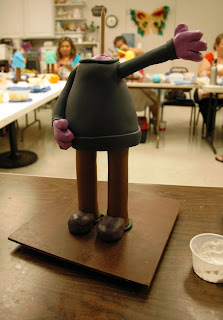 People did some lovely details here, frilly dresses, labcoats with pens in the pockets!

We then stuck the heads on the bodies and went to work on the faces. This is when things started getting fun, the characters really came to life! The most amazing character was this Gene Symonds, what a hoot! He still retained his muppet features, but was so original! 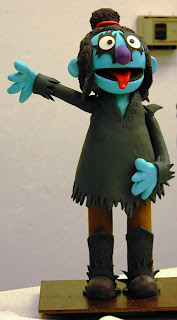 Everyones characters came out absolutely fantastic, they were all super pleased with them and Lauren and Ashley were very clever at coming around and tweaking our characters, and jumping in whenever we had a problem. I'd highly recommend this class to anyone.

We're also hoping that Linda gets lots more of these types of classes at 'Do it with Icing', definitely call and lobby if there is anyone you're interested in learning 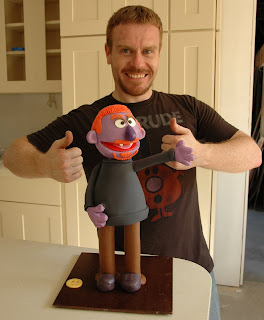 from. I'm hoping that James Roselle will be next!

I based my character on my husband, I think he was pretty happy with the results!