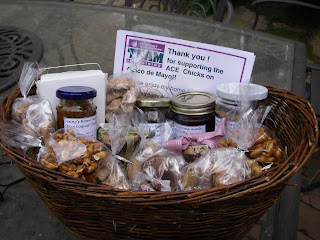 For Cinco De Mayo this year I became a waitress for the evening at the wonderful Big Kitchen in South Park. I'm told they do a great breakfast, so I'll be back! It was my last fundraiser for the Leukemia and Lymphoma Society. Many local restaurants were kind enough to offer raffle prizes, Better Half, Kous Kous, Wits End, and Khyber Pass were all very generous! 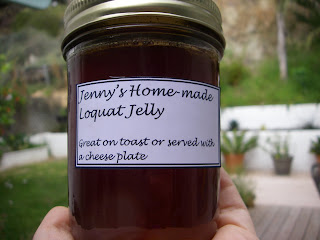 I thought I'd also mention my loquat jelly that I made with the remainder of my loquats. I basically took the seeds out, halved them, covered with water and boiled them for an hour or so until they are a pulp. I then strained them and weighted them and added 3/4 of the weight in sugar. This was then boiled until I pushed my finger through a blob on a plate and it remained as two separate parts.

Its made a very solid jelly, I think this would be good with cheese. It reminds me of the very trendy quince jellies I've seen around.

For a more traditional jam, I think this fruit would be best paired with another fruit, it seems to have set quite solid, and could help a fruit lower in pectin to set.

PS. A loquat is a stone fruit that looks a little like an apricot. Another name for it is japanese medlar. It seems to be something many people have in california as it is a really pretty tree, but they just leave the fruits to rot. I've seen them in quite a few gardens. What a shame!

PPS I always wear rubber gloves when dealing with any stone fruit to save my poor nasty fingers from getting stained! Thanks for the reminder, anonymous!
Posted by Jennywenny at 8:47 PM

Hi Jenny.
What is a loquat - is it like a kumquat?
Charlotte

My parents have a loquat tree in their garden, and we NEVER let them go to waste! We like to eat them while veging out on the couch watching tv. I just hate the way it stains your fingernails!

jenny - i grew up eating loquats from my opa and oma's backyard! they're delightful little nuggets of joy!