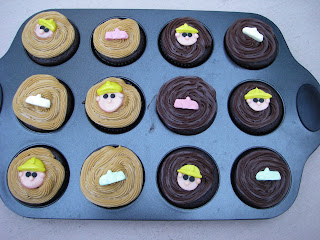 My friend's son is celebrating his birthday, and I thought it would be fun to make him some cakes, especially since he's allergic to eggs, so its difficult to find him nice treats that wont make him sick. I found these adorable cakes and thought I'd give them a try! I bought some gumpaste and decided it was too gross to actually use as a frosting, so I tried making mini bobs as a little cupcake topper. It worked great. I have a little more confidence to try things now. The other cakes were topped with little car candies I found at IKEA. 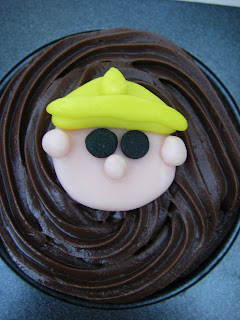 I used the chow recipe, which rose beautifully and produced lovely dark chocolate cakes. I topped with a chocolate frosting, and the other cakes, I topped with a whipped mixture of 8oz low fat cream cheese and a can of dulce de leche.

I learned two things, firstly that I dont think that tip was particularly good for the frosting. Made it look a bit poopish. Also, cream cheese frosting should be used only when the cakes are to be served immediately, and it is no good for anything except a quick swirl, the 'bobs' started to dissolve and look a bit grim. 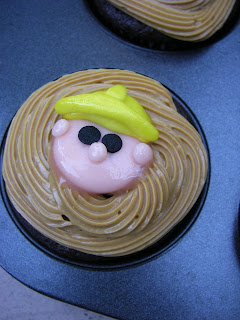 Hopefully the little tinker didnt realise, and was able to eat cake without getting sick.
Posted by Jennywenny at 8:06 PM

Those are just adorable!

Apparently I like to say your cupcakes are adorable.
I didn't know Ikea sold cupcake decorations! i love that store, unfortunately I can only order online as the nearest one is 4 hours away.

awwwwww...these cupcakes are so cute! i love bob the builder.