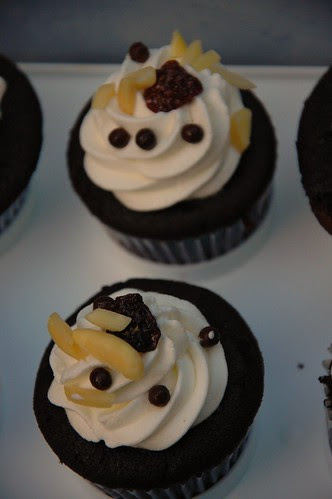 The first is a black forest cupcake. I took my favorite chocolate cupcake recipe, from 'Confetti Cakes' by Elise Strauss. Its lovely and moist and rich from the sour cream.

I found some tart morello cherries in a jar at Trader Joes, scooped out the middle of the cupcakes and popped a couple in. A little drizzle of kirsch would probably go well here too. I then whipped some cream with a little sugar and topped the cakes with delicious valhrona pearls, chopped almonds and a sour dried cherry.

I think I'll be using more whipped cream toppings, its a lot lighter than buttercream and I much prefer the flavor. The only down side is its not as durable or long lasting, the cakes really need to be gobbled up in a few hours. 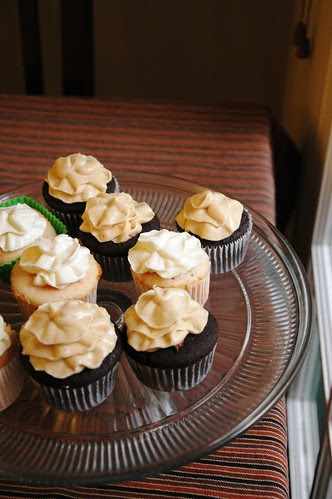 The other delicious cupcake I wanted to share was a chocolate hazelnut praline cupcake, I took the same delicious, moist chocolate cupcake, took a little scoop out, then popped a little nutella in the middle. I then topped with a praline buttercream, which is a little bit of a pain to make, but seriously the most delicious buttercream I've ever tried! The praline buttercream recipe comes from one of our daring bakers challenge from the filbert gateau, which was a truly delicious treat!

With such a decadent filling, I us

ed a little lighter touch to pipe the buttercream with a new technique.

The third cupcake I've made recently is a lighter one too, a guava chiffon cake, I adapted from a strawberry chiffon cake on Jen's website , just subsituting guava for strawberries. I filled with a strawberry and topped with just a little vanilla buttercream for people who want something on the lighter side. With strawberry season upon us, this is a delightful summer treat. 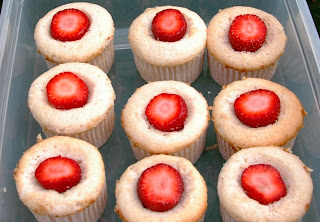 Posted by Jennywenny at 7:26 PM

Email ThisBlogThis!Share to TwitterShare to FacebookShare to Pinterest
Labels: Cupcakes

A Cake To Remember LLC said...

You know how I feel about cupcakes, but these flavors could probably persuade me to eat one!

Nutella in the center of a cupcake sounds perfect! I like your thinking!

These all sound delicious...but I'm trying to diet.

Did I ever mention how much I LOVE your pictures? Wow.

Mmm, those all look good.