A visit to Suzie's Farm 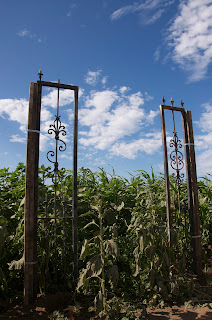 One of the things on my list when I gave up my job was that I wanted to become more connected with my food, and I wanted to tour some farms.  I finally had a chance to do this, thanks to the wonderful San Diego Foodbloggers network.  It was a wonderful morning out at the border in Chula Vista at Suzie's Farm.

Here is the entrance to their planned corn maze, which is also going to have a wedding in the center, how romantic! The farm was filled with a bounty of incredible produce and beautiful flowers.  Suzies farm offers farm tours for anyone who would like to come, its just $10 and you get to bring a bag and fill it up!  I think they would start to get suspicious if you were to come every week, I think part of their goal as a farm is to educate the public on sustainable farming and the danger of heirloom breeds dying out. 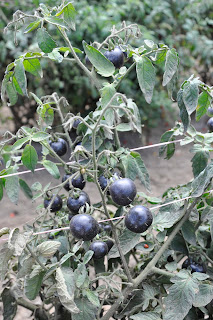 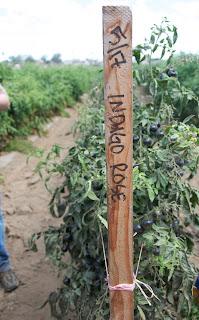 We were all particularly captivated by this heirloom variety of tomatoes, which were actually black!  I was a bit put off by the similarity to deadly nightshade, which is actually a relative of the tomato.

The tomatoes are ripe when they get a red bottom, I picked a few out of curiosity, and they were delicious tomatoes, tangy and sweet at the same time, I'd love to get these again! 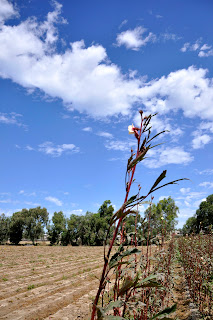 I was also surprised to see an okra plant for the first time, what a pretty flower they have, along with a lovely red stalk. We werent allowed near these, Wholefoods have first dibs on them! 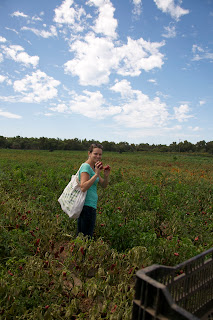 My friend Kristen came along, here she is picking some peppers.  I'm ashamed to admit I cant remember which pepper is which!  I know some were spicy and some werent, and some were 'roulette' peppers as they were sweet peppers which had been planted next to spicy peppers so some had been pollinated by the spicy peppers and some by sweet, you just didnt know what you were going to get!! 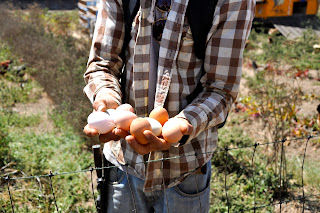 We all fell in love with the chickens, who were running around a penned area and generally causing chaos.  There were so many breeds.  Look at all the different colors of eggs they produce!  I love the thought of getting my own hens, but I don't think thats on the agenda for the moment, my poor husband would probably wind up having to help take care of them. 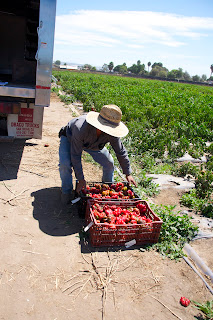 Here is one of the workers loading up some peppers, I guess they must work 7 days there, its a hard life running a farm... 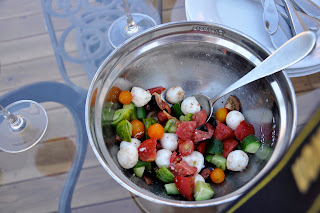 Here is a quick salad I threw together when I got home, mozzarella, persian cucumbers and some of the wonderful tomatoes.

Posted by Jennywenny at 7:19 PM

very nice post JW! i've been meaning to do a tour one of these days...those black tomatoes are quite striking. i've only bought produce form their stand (on saturdays only).

I have wanted to go to Suzie's forever -- and I keep telling myself I'll visit the other farms as well, but...hopefully it will be soon. Loved your write up :) and as far as those black tomatoes go, didn't native Americans think tomatoes in general were toxic? Interesting!