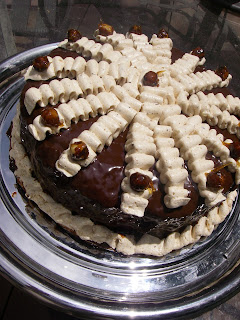 What an exiting challenge with so many components! I really enjoyed this one. Some of the Daring Bakers were a bit disappointed with another cake, but I was very happy to have a big showy dessert to take to a party to celebrate the end of my bike season. We had good reason to celebrate, after attempting the Death Ride two weeks ago!

The cake was absolutely delicious, the birthday boy cut the cake, we all took a slice and everyone was silent. Next thing I knew the cake had disappeared! I followed the recipe exactly, I'm really glad I went out and got Grand Marnier, it didn't taste totally alcoholic, just a nice background. My least favorite part of the challenge was skinning the hazelnuts. That totally sucked! I say either don't bother or buy them skinned. 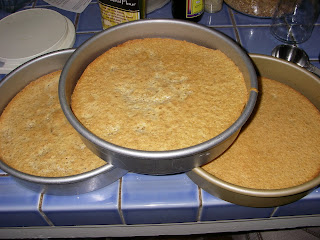 I made 3 separate cakes, as I don't have a tool to make the layers, and I didn't really trust my abilities or the integrity of the cake. I'm glad I did that, it worked out great. When making the cake, its easier to whip up the egg whites first with a clean bowl and then whip up the yolks afterwards. 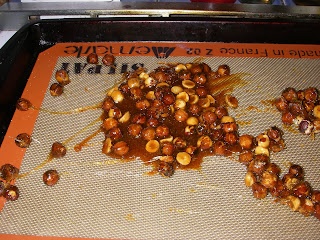 I then set to making the praline paste. It was a little nerve wracking watching the sugar just sitting there in the pan, but eventually it started to melt. I ignored the many warnings not to stir, I took a wooden spoon to it and made sure it all melted without burning and it worked fine, the hazelnuts were quickly added and then poured onto a silpat. These make excellent decorations and this is a technique I'll definitely be repeating.

The buttercream was next. This all came together very well, I also whipped the cream and set aside. It was easy enough pouring on the simple syrup to moisten the cake, then adding 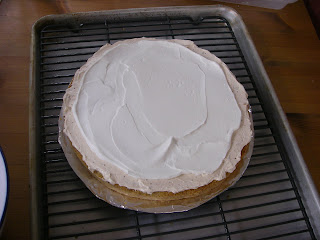 I was left with a three layer cake, which was all moist and lovely. This was starting to look a little on the unstable side once I'd brushed with the apricot glaze. Oh dear.

It had a bit of extra time to stand as the ganache seemed quite runny, so I chilled it for 30 minutes before pouring.

As I poured the ganache over the cake, I realized the sides looked very lumpy, which was a little disappointing! I don't think it would be possible to 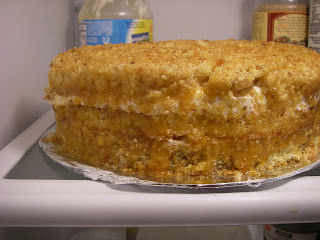 get any other result if you were following the recipe exactly. Solutions would be to maybe apply a crumb coating of buttercream to create a smooth edge for the ganache to cover. Oh well, maybe next time!

I then tried a new piping technique to decorate, I was very happy with the effect. The bumpy sides didnt seem quite so pronounced with the decorations. 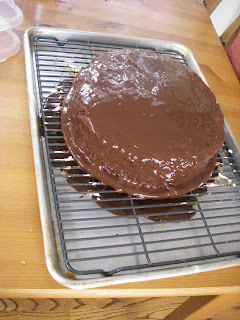 say, the proof of the pudding is in the eating, and I was very happy with the final result. It was definitely getting lots of 'oohs and ahhs' from people, which continued as they ate!

I'm afraid I didnt get a chance to get a picture of the slices, it was gone too quickly!

Please see the lovely Mele Cotte for the recipe and her take on it, thankfully she was very gracious about all the whining bakers who were complaining about this wonderful recipe. Good on her!

PS please see the daring baker blogroll for other people's interpretation of this recipe.
Posted by Jennywenny at 9:35 AM

Beautifully decorated cake! I'm glad all those you shared the cake with enjoyed it!

Wow..I love the icing on your cake. It has come out so beautiful. Well done...

geesh, youre making me look bad! your cake looks so pro! I love it!

Beautiful piping on that cake! I'm so out of control most of the time on my piping I just make little dots. What a chicken. Your cake is gorgeous and seeing that apricot glaze on it makes me wish I hadn't forgotten to make one. As far as the hulls go on the nuts -- my almonds had hulls. It just added to the texture of the whole thing. Cheers from another SD blogger!

I liked how you got the icing to pipe like in the pic...looks yum!

Love the piping on top! I don't think I have the patience to do piping like that.

Your cake looks great! I also used Grand Marnier in my cake, it really does add a nice flavor. Great job!

I love your cake! Beautiful decorating.

This was my first DB challenge, and I'm having fun looking at all the different cakes made from this recipe.


I learned a lot! Looking forward to August's challenge.

I never thought to do three different cakes instead of trying to cut them! Great idea! Wonderful job on this challenge.

WOW! You're a great "pipper"! It's beautiful!

I love how you decorated it! Looks very fancy. How neat that you got to make it for a birthday.

Beautiful cake! Good luck and have fun in your Wilton class.

You did a fabulous job on the challenge! Great piped decorations!